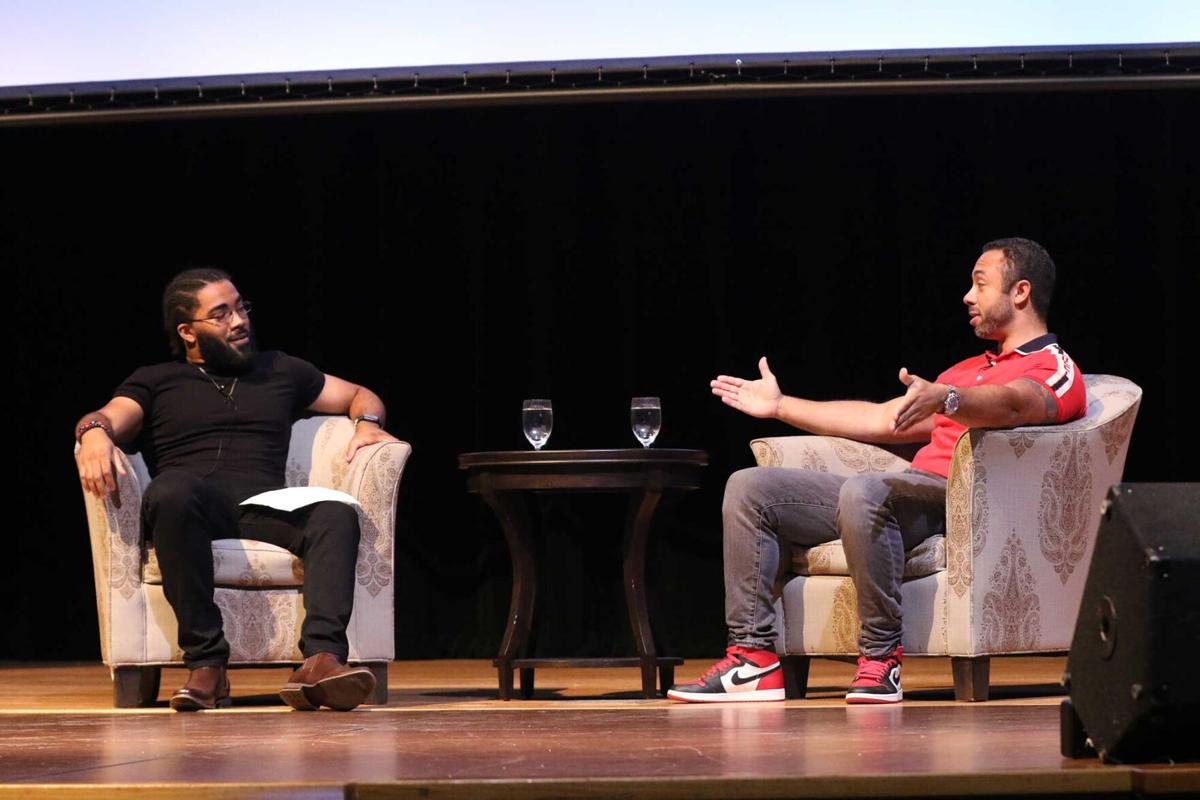 Seguin Police Officer Brandon Smith (right) talks about his personal life and the path he took to becoming a police officer with Texas Lutheran University graduate Rashad Tolbert during the "Beyond Brutality:Building Bridges, Breaking Barriers" event on Monday, Nov. 8, 2021 in Jackson Auditorium. 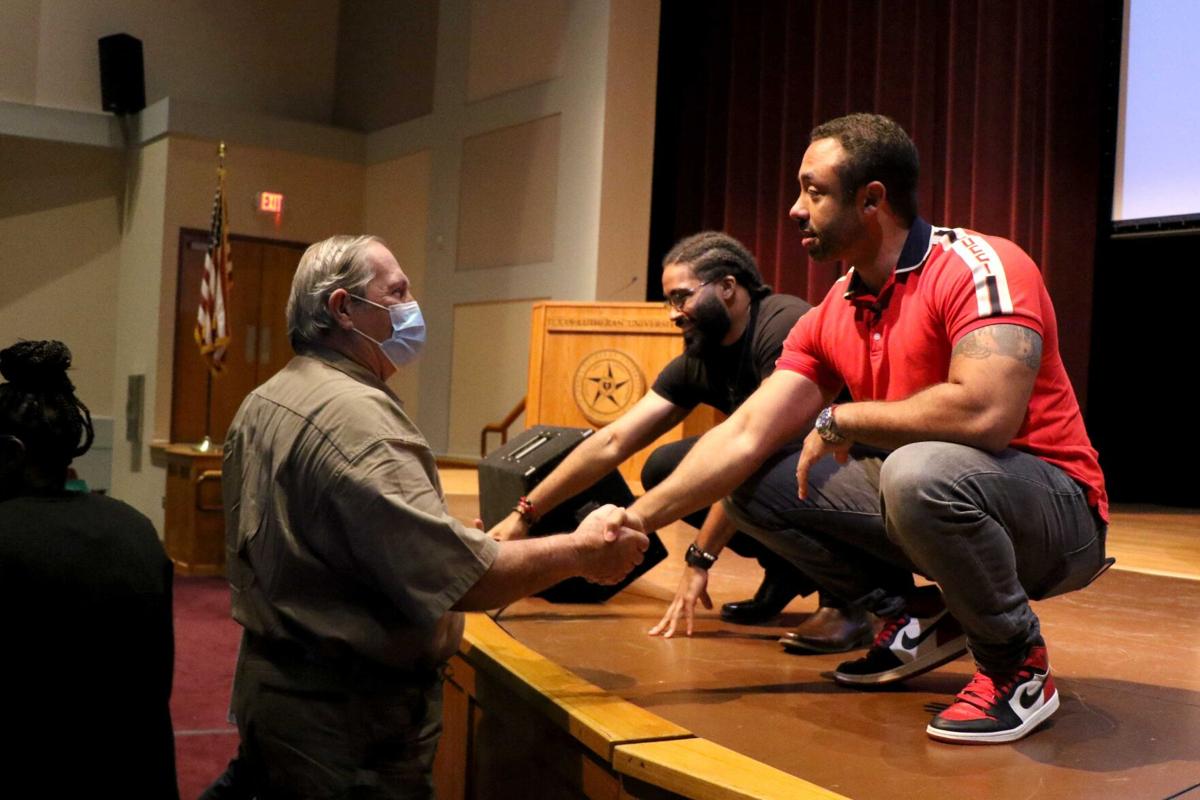 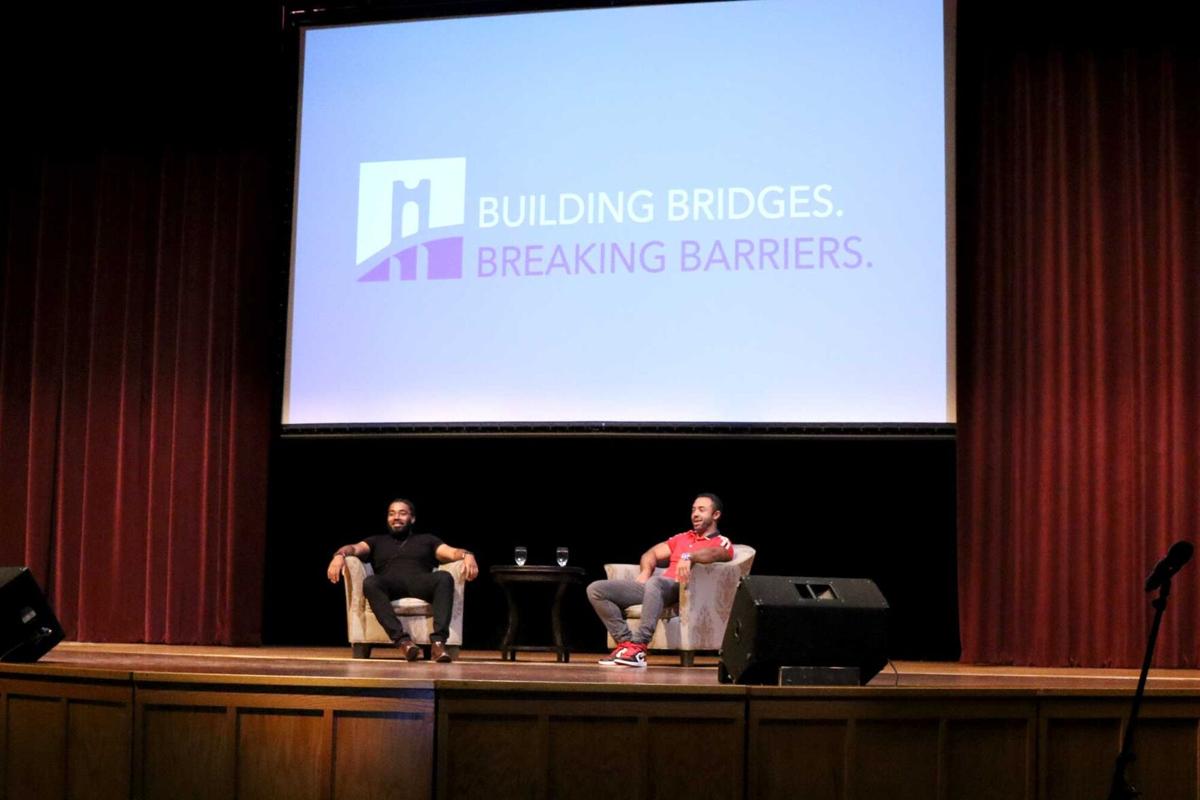 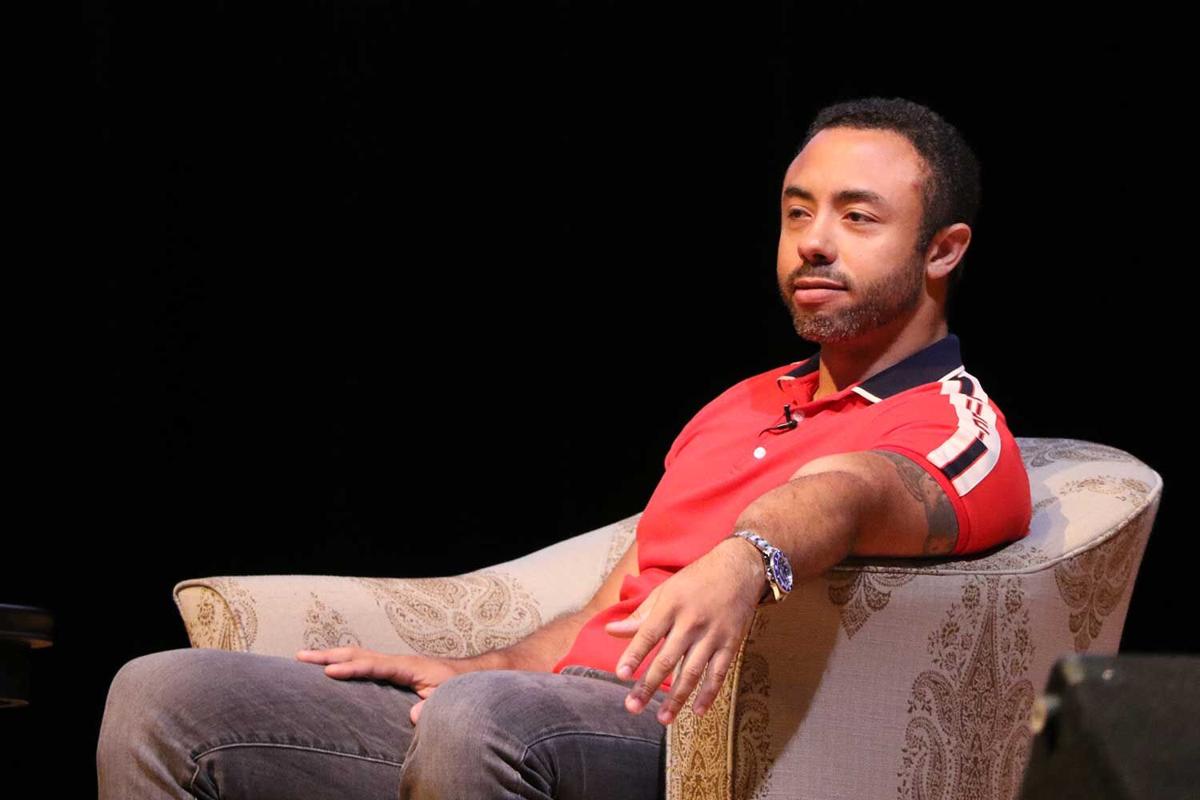 Seguin Police Officer Brandon Smith listens to a question from an audience during the "Beyond Brutality:Building Bridges, Breaking Barriers" event on Monday, Nov. 8, 2021 in Jackson Auditorium.

Seguin Police Officer Brandon Smith (right) talks about his personal life and the path he took to becoming a police officer with Texas Lutheran University graduate Rashad Tolbert during the "Beyond Brutality:Building Bridges, Breaking Barriers" event on Monday, Nov. 8, 2021 in Jackson Auditorium.

Seguin Police Officer Brandon Smith listens to a question from an audience during the "Beyond Brutality:Building Bridges, Breaking Barriers" event on Monday, Nov. 8, 2021 in Jackson Auditorium.

Texas Lutheran University graduate Rashad Tolbert and Seguin Police Officer Brandon Smith sat across from each other on the Jackson Auditorium stage in front of an audience to have an open and honest conversation.

Rashad, the former Texas Lutheran University Black Student Union president, asked Smith, a Black police officer, questions about people of color, police work in Seguin and on a national level and highly publicized events involving black men who were killed by police during Beyond Brutality: A candid conversation from both sides of the badge held on Monday.

The event is an effort from the Seguin Police Department and the Seguin Community Collation to “build bridges and break barriers” between law enforcement and the black community — a first of its kind, Smith said.

“There is nothing like this anywhere,” he said. “There isn’t open dialog with members of the community and police departments. They say there is, but nobody ever has these types of conversations where you can talk to people and actually get to know exactly what they think and who they are.”

During the hour-long conversation, Smith fielded questions from Tolbert about his personal and professional life.

They talked about the death of George Floyd, the Black Lives Matter movement, and how law enforcement handles mental health situations. Smith also fielded questions recorded by Texas Lutheran University students, as well as several from the audience.

The open discussion is something Smith hopes will lay the foundation for greater discussions in other community and eventually, greater understandings between the community and police.

“A wise man plants a tree that he may not ever sit under its shade,” Tolbert said. “This is something, long-term, down the road, people will see the value of it. Tonight was about getting beside each other and talking. Although it may have seemed boring to some people, it opens up a door for the next time, where we can be more direct, be more challenging. This is just a start.”

Tolbert admitted he was nervous about the event, not the conversation itself, but the tone it could take or the message it could send. He felt that for the start of a larger, more in-depth discussion, Monday’s session went well.

Opening the dialog between the community and the department is important to keeping everyone safe and ensuring no matter the encounter, everyone goes home, Smith said.

“Just getting the conversation going will hopefully ease that nervousness where people can start to trust and then start to communicate,” Smith said. “A lot of it is trust. Minority community feels that they can’t trust the police and there has been some legitimate reasons as to why they feel that way. As far as Seguin goes, that is not our reality here, you can trust us. Hopefully people will start to trust us and talk to us and that this will branch out to other areas.”

Smith reminded everyone that while he is a police officer, he is a person first.

“I understood how it is before I was a police officer,” he said. “I wasn’t always a cop, so I understand the stigma around talking to the police. You can come talk to us, you can come talk to me. We’re regular people, too. We want to get to know you.”

As more conversations like the one Monday happen, Tolbert wants people to go into them with an open mind.

Wish this was live streamed. As a former criminal, alcoholic and addict. You can definitely us this to help others take away the police officer stigmas & also see "our" part in the current issue.

Being a former criminal, addict & alcoholic I really wish it was available on video. I work with others now at a huge nonprofit drug, alcohol and homeless rehab/shelter & just reading the article it offers a lot of insight on future topics. Not just for minorities but all stigmas on police/military.

Excellent to read the article! A police officer who was involved in a recent shooting at the University of New Mexico is sharing his experiences and wisdom with students and now it's easier to get bestessay site in order to manage the task. Keep it up!